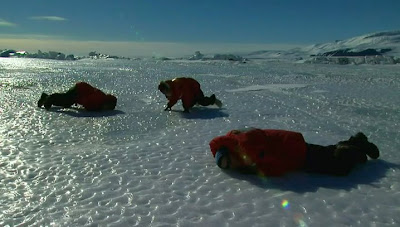 1. By dint of declaration the so-called Cinema Verité is devoid of verité. It reaches a merely superficial truth, the truth of accountants.

2. One well-known representative of Cinema Verité declared publicly that truth can be easily found by taking a camera and trying to be honest. He resembles the night watchman at the Supreme Court who resents the amount of written law and legal procedures. "For me," he says, "there should be only one single law: the bad guys should go to jail."
Unfortunately, he is part right, for most of the many, much of the time.

3. Cinema Verité confounds fact and truth, and thus plows only stones. And yet, facts sometimes have a strange and bizarre power that makes their inherent truth seem unbelievable.

5. There are deeper strata of truth in cinema, and there is such a thing as poetic, ecstatic truth. It is mysterious and elusive, and can be reached only through fabrication and imagination and stylization.

7. Tourism is sin, and travel on foot virtue.

8. Each year at springtime scores of people on snowmobiles crash through the melting ice on the lakes of Minnesota and drown. Pressure is mounting on the new governor to pass a protective law. He, the former wrestler and bodyguard, has the only sage answer to this: "You can´t legislate stupidity."

9. The gauntlet is hereby thrown down.

10. The moon is dull. Mother Nature doesn´t call, doesn´t speak to you, although a glacier eventually farts. And don´t you listen to the Song of Life.

11. We ought to be grateful that the Universe out there knows no smile.

12. Life in the oceans must be sheer hell. A vast, merciless hell of permanent and immediate danger. So much of a hell that during evolution some species - including man - crawled, fled onto some small continents of solid land, where the Lessons of Darkness continue.